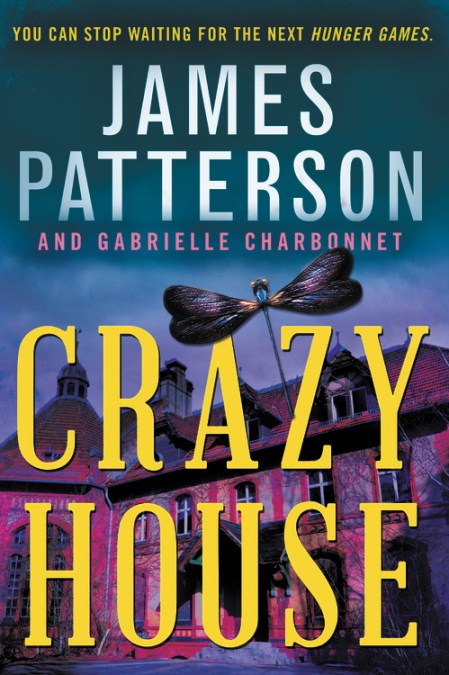 Two twins face a world of Death Row and dystopia in James Patterson’s gripping thriller-perfect for fans of The Hunger Games.

Seventeen-year-old Becca Greenfield was snatched from her small hometown. She was thrown into a maximum-security prison and put on Death Row with other kids her age. Until her execution, Becca’s told to fit in and shut her mouth . . . but Becca’s never been very good at either. Her sister Cassie was always the good twin.

There were no charges. There was no trial. There will be no escape. Becca’s only hope is that her twin sister will find her. That perfect little priss Cassie will stop following the rules and start breaking them, before it’s too late. Because her jailers made a mistake that could get them both killed: They took the wrong twin.

Crazy House is a non-stop thrill ride from James Patterson, the #1 bestselling author of Maximum Ride, Witch and Wizard, and Confessions of a Murder Suspect.

The Fall of Crazy House by James Patterson and Gabrielle Charbonnet 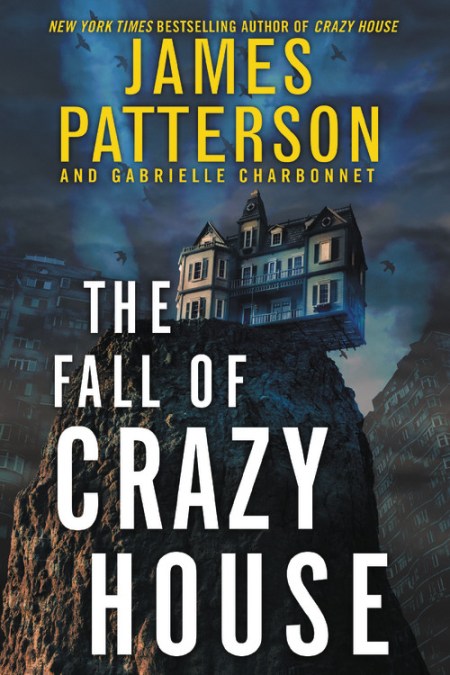 Escape is just the beginning.

Twin sisters Becca and Cassie barely got out of the Crazy House alive. Now they're trained, skilled fighters who fear nothing--not even the all-powerful United regime.

Together, the sisters hold the key to defeating the despotic government and freeing the people of the former United States. But to win this war, will the girls have to become the very thing they hate?

In this gripping sequel to James Patterson's YA blockbuster Crazy House, the world is about to get even crazier.

Clark and Division by Naomi Hirahara 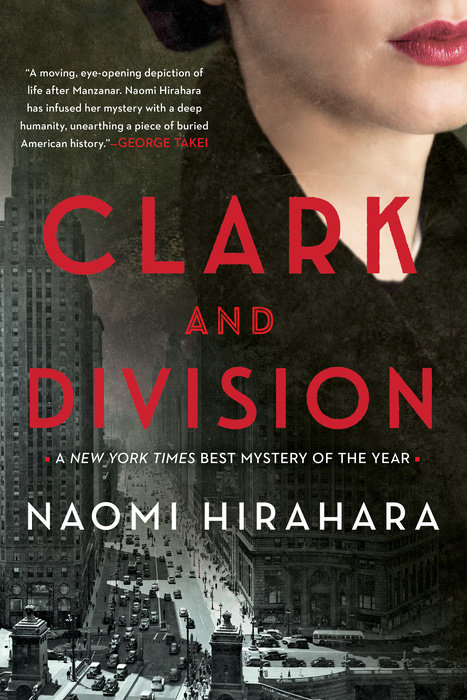 Set in 1944 Chicago, Edgar Award-winner Naomi Hirahara’s eye-opening and poignant new mystery, the story of a young woman searching for the truth about her revered older sister’s death, brings to focus the struggles of one Japanese American family released from mass incarceration at Manzanar during World War II.

Chicago, 1944: Twenty-year-old Aki Ito and her parents have just been released from Manzanar, where they have been detained by the US government since the aftermath of Pearl Harbor, together with thousands of other Japanese Americans. The life in California the Itos were forced to leave behind is gone; instead, they are being resettled two thousand miles away in Chicago, where Aki’s older sister, Rose, was sent months earlier and moved to the new Japanese American neighborhood near Clark and Division streets. But on the eve of the Ito family’s reunion, Rose is killed by a subway train.

Aki, who worshipped her sister, is stunned. Officials are ruling Rose’s death a suicide. Aki cannot believe her perfect, polished, and optimistic sister would end her life. Her instinct tells her there is much more to the story, and she knows she is the only person who could ever learn the truth.

When a fellow passenger on his usual train goes missing, a man begins to wonder if everything is as it seems.

A family matriarch takes up residence in the Underworld. 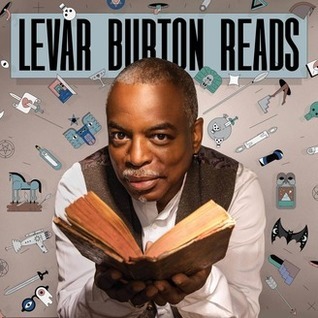 Ink and Bone (The Great Library #1) by Rachel Caine 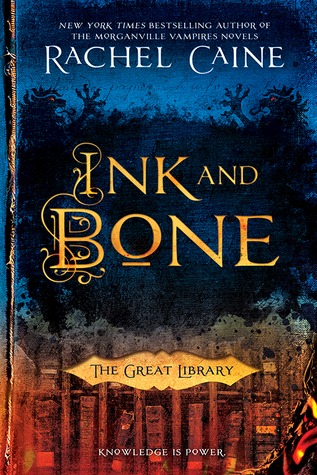 Ruthless and supremely powerful, the Great Library is now a presence in every major city, governing the flow of knowledge to the masses. Alchemy allows the Library to deliver the content of the greatest works of history instantly—but the personal ownership of books is expressly forbidden.

Jess Brightwell believes in the value of the Library, but the majority of his knowledge comes from illegal books obtained by his family, who are involved in the thriving black market. Jess has been sent to be his family’s spy, but his loyalties are tested in the final months of his training to enter the Library’s service.

When his friend inadvertently commits heresy by creating a device that could change the world, Jess discovers that those who control the Great Library believe that knowledge is more valuable than any human life—and soon both heretics and books will burn…

A Discovery of Witches by Deborah Harkness

A richly inventive novel about a centuries-old vampire, a spellbound witch, and the mysterious manuscript that draws them together.

Deep in the stacks of Oxford's Bodleian Library, young scholar Diana Bishop unwittingly calls up a bewitched alchemical manuscript in the course of her research. Descended from an old and distinguished line of witches, Diana wants nothing to do with sorcery; so after a furtive glance and a few notes, she banishes the book to the stacks. But her discovery sets a fantastical underworld stirring, and a horde of daemons, witches, and vampires soon descends upon the library. Diana has stumbled upon a coveted treasure lost for centuries-and she is the only creature who can break its spell.

Debut novelist Deborah Harkness has crafted a mesmerizing and addictive read, equal parts history and magic, romance and suspense. Diana is a bold heroine who meets her equal in vampire geneticist Matthew Clairmont, and gradually warms up to him as their alliance deepens into an intimacy that violates age-old taboos. This smart, sophisticated story harks back to the novels of Anne Rice, but it is as contemporary and sensual as the Twilight series-with an extra serving of historical realism.

The Alchemist by Paulo Coelho 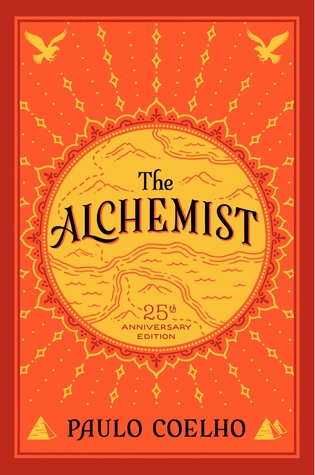 Paulo Coelho's enchanting novel has inspired a devoted following around the world. This story, dazzling in its powerful simplicity and soul-stirring wisdom, is about an Andalusian shepherd boy named Santiago, who travels from his homeland in Spain to the Egyptian desert in search of a treasure buried near the Pyramids.

Along the way he meets a Romany woman, a man who calls himself a king, and an alchemist, all of whom point Santiago in the right direction for his quest. No one knows what the treasure is, or whether Santiago will be able to surmount the obstacles in his path; but what starts out as a journey to find worldly goods turns into a discovery of treasure within.

Lush, evocative, and deeply humane, the story of Santiago is an eternal testament to the transforming power of our dreams and the importance of listening to our hearts.

The day after they moved in, Coraline went exploring....

In Coraline's family's new flat are twenty-one windows and fourteen doors. Thirteen of the doors open and close.

The fourteenth is locked, and on the other side is only a brick wall, until the day Coraline unlocks the door to find a passage to another flat in another house just like her own.

At first, things seem marvelous in the other flat. The food is better. The toy box is filled with wind-up angels that flutter around the bedroom, books whose pictures writhe and crawl and shimmer, little dinosaur skulls that chatter their teeth. But there's another mother, and another father, and they want Coraline to stay with them and be their little girl. They want to change her and never let her go.

Other children are trapped there as well, lost souls behind the mirrors. Coraline is their only hope of rescue. She will have to fight with all her wits and all the tools she can find if she is to save the lost children, her ordinary life, and herself.