Books from the Library Catalog

The Fire Next Time

If Beale Street Could Talk

Notes of a Native Son

The Price of the Ticket

Tell Me How Long the Train's Been Gone 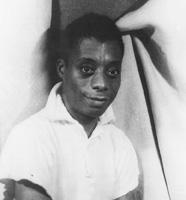 An American novelist, essayist, and playwright, James Baldwin wrote with eloquence and passion on the subject of race in America. His main message was that blacks deserve to be treated as equals and that the civil rights problem derives from the insecurity of the white man, who needs a “Negro” to whom he can feel superior.

James Arthur Baldwin was born on August 2, 1924, in the Harlem section of New York City, to David and Berdis Jones Baldwin. His father, a Sunday minister, was very strict with his nine children, of whom James was the oldest. Teachers remembered James as a slight, intelligent, sad-looking boy. After graduating from high school in 1942, he worked at various jobs. A literary fellowship in 1948 enabled him to go to Europe, where he lived mostly in France. Go Tell It on the Mountain (1953), an autobiographical novel, helped establish him as a writer.

People You Should Know
Credo Reference